Christian A. Tryon, project archaeologist, is an Assistant Professor in the Archaeology Program of the Department of Anthropology at Harvard University.  He continues to work on field projects at other Pleistocene archaeological sites in Kenya, Tanzania, Turkey, and France.  More information about his research can be found here.

Daniel Peppe, project geologist, is an Associate Professor in the Department of Geology at Baylor University.  His research focuseson integrating palaeoclimatology, geology, paleobotany and paleomagnetism to reconstruct Cenozoic climates and palaeoenvironments. He conducts his research primarily in East Africa and North America.  More information about his research can be found here. 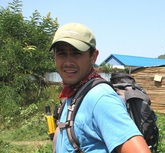 J. Tyler Faith, project zooarchaeologist, is a UQ Postdoctoral Research Fellow in the School of Social Sciences at the University of Queensland. His research concerns the dynamic relationships between Quaternary climate change, faunal communities, and human behavior and evolution. More information about his work can be found here.